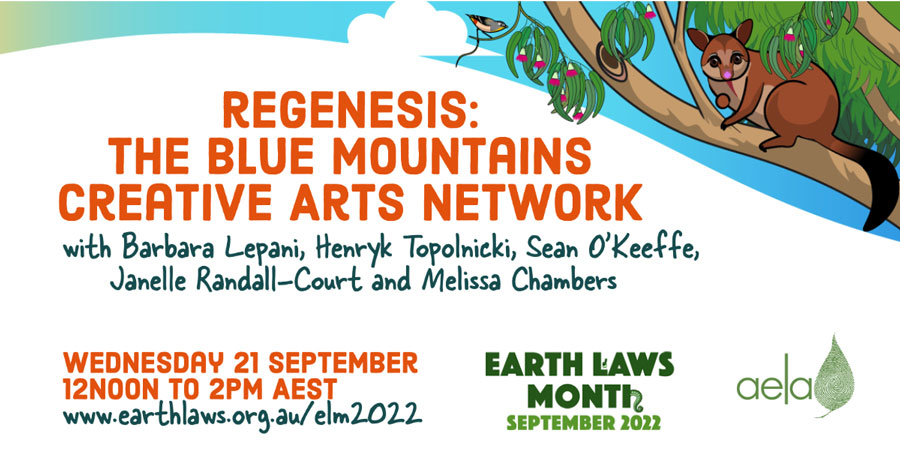 ABOUT THE REGENESIS PROJECT

Through the Regenesis Collective (regenesis.org.au), the Blue Mountains Creative Arts Network is telling the new/ancient story of RE-GENESIS, a way out of our dark path of ecological and civilisational collapse that can be traced back to a foundational story of Western Culture in Genesis, Old Testament, Verse 1.26. This story from Western culture—the idea that God made ‘man’ in his own image and gave him dominion over the Earth and all its lifeforms – generated the idea that only humans have souls/minds, and therefore the ‘right’ to control and exploit ‘brute’ nature for our benefit. 18th century mechanistic materialist science and the various waves of our techno-industrial revolutions since have further weaponised our alienation from nature through technological entrancement based on what First Nations’ elder Mary Graham has called ‘extractivist logic’. Regenesis counters this with our new/ancient story rooted in the ‘relationist logic’ of Caring for Country embodied in First Nations knowledge systems that have been kept alive by the arts in the songlines as a living, breathing presence in the land. This ancient story is now the foundation of the modern story of REGENESIS, informed by the wisdom of total ecological systems awareness in every cell of our being, knowing and praxis in all its multiple meanings and expressions. It is the story, which must now shape our future.

BARBARA LEPANI – Barbara is a sociologist of technological innovation, writer, and cultural change advocate, with the lived experience of living across cultures. She is also a long-term student-practitioner of Tibetan Buddhism and author of Tulkus, Tertons Turmoil: East Tibet 1855-1955, and Call of the Dakini: A Memoir of a Life Lived. Barbara is the president of Blue Mountains Creative Arts Network and co-ordinator of the Regenesis Collective and its various multi-arts regenesis projects. She is a key force behind the recently formed Arts & Culture Alliance Blue Mountains, and supporter of the Blue Mountains Planetary Health Initiative and the regenerative agriculture movement.

HENRYK TOPOLNICKI – Henryk is a sculptor with over 25 years experience producing public artworks in metal, stone, wood and a variety of reclaimed materials. He is currently developing an extensive sculpture garden set in the rugged landscape of the Monkey Creek Escarpment near the famous Garden of Stones, which was heavily impacted by the Black Summer fires of 2019-2020. With his partner Merren French, Henryk also runs a commercial art gallery in the Monkey Creek art precinct at Dargan just east of Lithgow, featuring works by local artists and artisans.

SEAN O’KEEFFE – Sean is a multi-disciplinary artist who works across a range of media including video, painting and site-specific sculpture that responds to the Blue Mountains environment. His meditation on hope, which points to the breathtaking dimension of the human spirit and its efforts, suffuses his artistic sensibility and responses to time and the environment. As a filmmaker, Sean has worked extensively with young people teaching and producing many award-winning films.

JANELLE RANDALL-COURT – Janelle is a Bundjalung arts worker and practising artist who lives in the Blue Mountains. She has a long history of works that re-imagine our relationship with domestic waste through art, as part of her First Nation’s commitment to Caring for Country. She has co-produced a documentary featuring local Gundungurra Elder, Aunty Carol Cooper, featured in her work with Barbara Lepani on REIMAGINE, a waste to art project with funding support from Wentworth Health, Nepean Primary Health Network. The final part of this project till link this work to REGENESIS whereby participants will co-create their own regenesis journey through their different art works.

MELISSA CHAMBERS — Melissa is a young artist living and practising in the Blue Mountains whose work Art-i-fact Being won the prize for the best artwork in REGENESIS, an anthology of poetry, short stories and artworks produced by Rosey Ravelston Books and Publishing in partnership with the Blue Mountains Creative Arts Network for the 2022 Winter Magic Festival Revival. Together with her poem, ‘Lungs of the World’, Melissa’s art practice speaks directly to the search for a regenerative philosophy of living and her engagement with the Blue Mountains Planetary Health Initiative.