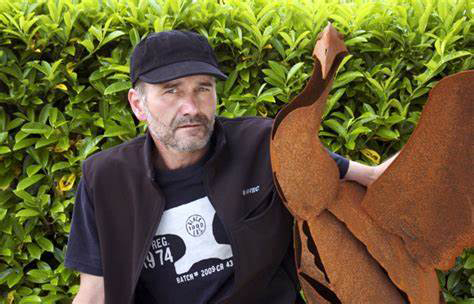 Henryk Toplnicki is a sculptor who came to live in Australia as a refugee in his early thirties. Trained as a teacher in Poland, in Australia he undertook whatever work he could, eventually finding work in a foundry where he began experimenting with sculpture at night after work. This led to further study at East Sydney Tech, home to many artists of his generation, and work with various theatre equipment companies that extended his skills. Henryk works in metal, wood and stone, including recovered industrial materials. His work, which includes public art and small sculptural works, is inspired by the rugged landscape of the Monkey Creek escarpment, near the famous Gardens of Stone in the Wollemi National Park. As well as his own extensive sculpture garden that surrounds his workshop, Henryk founded Gallery H, which evolved from a dream he has had for quite a long time. After more than 20 years as a designer-maker and public artist, Henryk decided the time had come to create, make and sell work in his own space. Together with his partner Merren this dream has now become a reality, Gallery H is not a fine art gallery; it is a place encompassing wild, urban, industrial, agricultural and more. Henryk’s works is also playful and replete with an ironic sense of humour.